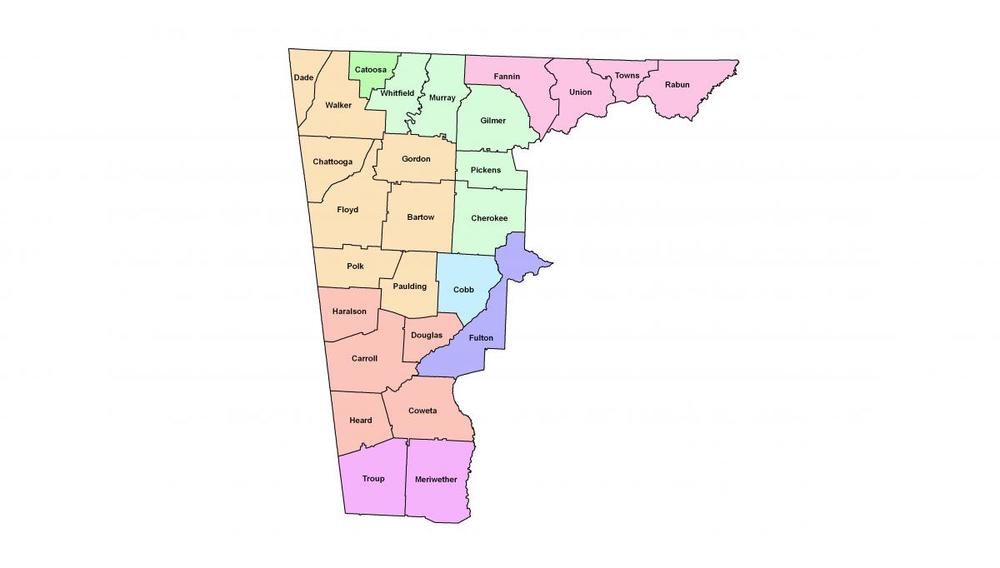 Until further notice please contact the Athens office with any questions related to Region 1.

Thanks to scholarships provided by Cobb County SWCD, four Cobb County area high school students got a taste of college life as well as learning more about Georgia’s natural resources and the opportunities available in the conservation and agricultural fields at the Natural Resources Conservation Workshop held at Abraham Baldwin Agricultural College in Tifton, Georgia June 8-12, 2014. Tenth grade students Konner Longino and Dennis Munn of Pebblebrook High School, home schooled eleventh grade student Ty Patterson and ninth grade student Simone Carter of Osborne High School attended the workshop in middle Georgia while staying at the college. They participated in a wide variety of classes including careers in forestry, soil science, water conservation and the outdoor classes including skeet shooting, bow and arrow target practice, fishing, how to do a prescribed burn and how to tell the age of a tree. The forestry segment impressed both Simone and Dennis; as Dennis put it: “I was surprised to find out how much forest rangers are involved in conservation.” Students Konner Longino and Dennis Munn are also participating in the Earth Team Volunteer Program through NRCS this summer, working in the office and out in the field taking GPS measurements and working alongside the district conservationist for Cobb County.

Congratulations to Limestone Valley SWCD on their 75th Anniversary! On May 12, 1939, the Limestone Valley Soil and Water Conservation District (SWCD) was organized and is a legal subdivision of the Georgia State Government.

The Limestone Valley SWCD hosted a workshop on Monday, July 28, 2014, to see their newly purchased GrassWorks Weed Wiper. The equipment is designed to treat noxious weeds, and the district has made the machine available for rent through the Hinton Milling Company. Experts talked about Farm Bill conservation programs, litter spreader truck calibration, and nutrient management planning. The workshop was held at the Hinton Volunteer Fire Station, 9273 Georgia Highway 53 W, Jasper, Ga. 30143, and lunch was provided by the Hinton Volunteer Fire Department.

On Friday, October 3, 2014,  Roosevelt SWCD held a ‘Youth Wildlife Field Day’ at Troup County High School in LaGrange, Georgia, at the Marvin H. Jones Memorial Outdoor Learning Center from 9:00 a.m. to Noon.  Several conservation agencies participated in the event that allowed area 4th Graders to have a hands-on learning experience outside of their own classrooms.

On Saturday, September 27, 2014, the West Georgia SWCD held its 2014 Appreciation Banquet at Supervisor Tommy Waldrop’s Farm, Winston (near Villa Rica).  The supervisors celebrated 76 years as a District. Billy Sims was awarded 2014 Conservationist of the Year. After retiring from the Soil Conservation Service in 1987, he began farming full time.  He expanded the family farm by adding an additional 225 acres and eight more chicken houses.  With the additional chicken houses, he became the largest broiler grower in the county at that time.

This event came about due to several FFA teams reaching out to the local NRCS office requesting a local “training” competition.  The West GA SWCD was excited to host and sponsor this event and provided plaques and cash awards to the winners.  The result was a fun, interactive event that provided these teams not only with a local competition, but some educational soils training as well.   The District has committed to hosting this event annually.

On April 28, representatives from UGA Cooperative Extension, Farm Service Agency, Natural Resources Conservation Service, Forestry, Georgia Soil and Water Conservation Commission, Rolling Hills RC&D Council held a workshop in Carrolton at 900 Newnan Road, Carrollton, Ga., 30117, at the Ag Center. to explain what each agency does and how they can help with farm and farm business.