Until further notice please contact the Athens office with any questions related to Region IV. 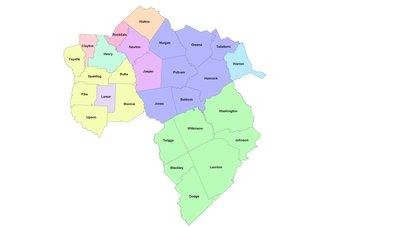 The annual Indian Pow Wow was held at the Tomlinson farm located in Dudley, Georgia on November 19 and 20. The event is not only a fun outing for the kids and an opportunity to make some memories with their parents, but it is also a learning experience. The farm has different stations located all around the property where kids can experience different activities including using a bow and arrow, viewing different animal hides from DNR, storytelling around a fire, basket weaving, and experiencing an outdoor picnic. David Hall, GSWCC Region IV, has been sharing the importance of water for seven years now at the event. He uses the enviroscape with food coloring to represent the different types of pollution that can enter our drinking water, and cotton to represent clouds in replicating the water cycle. The Central Georgia Soil and Water Conservation District contributes items such as good water stewardship materials and pencils to the students. Over 250 kids and approximately 100 adults enjoyed the outing over a two-day period.

On Thursday April 17, 2014, the Central Georgia Soil and Water Conservation District held its 52nd Annual Conservationist of the Year banquet at the First Baptist Church located in Cochran, Georgia. An individual or business was recognized from each County in the District for their Conservation efforts. The Central Georgia District presented a special certificate of appreciation to retiring NRCS Soil Conservationist, Danny Bennett, who has worked with Twiggs and Bleckley Counties for many years. Special singing entertainment was performed by Papa’s Pride and the keynote speaker for the night was Mr. Zippy Duvall, President of the Georgia Farm Bureau. Special guests in attendance included Representative Bubber Epps, NRCS Area Conservationist Sidney Lanier, and GASWCC Executive Director Brent Dykes.

The field day began with a tour bus ride visiting Mr. Roger Brown’s farm located in Chauncey, Georgia. There the group observed alfafa interseeded in burmudagrass and gained more insight on how to grow alfafa successfully. From there the tour gathered at Mr. Jonathon Fordham’s farm where a working facility, stream crossing, and other various conservation practices were viewed. Finally, the tour ended back at Gully Branch Farm to view Mr. Barrs’ silvopasture. A sponsored meal was provided by various vendors and the meeting closed with a discussion of farm bill cost-share opportunities and an overview of the day’s events. The event was well attended by people from across the state of Georgia.

Advanced Irrigation Management Workshop was offered in conjunction with the Ocmulgee River SWCD on March 13, 2014

Northwest Laurens Elementary school, located in Dudley, Georgia, has been recently teaching their kids about soil. Considering the young age of the students, they have been learning the basics of soil quality and the importance of soil. On March 6, 2014, David Hall with the Georgia Soil and Water Conservation Commission visited the school and talked to all eight kindergarten classes about soil. He gave demonstrations on the different kinds of soils by showing how soils vary with color and texture. He also showed the kids the difference in poor sandy soils versus soils that are rich in nutrients and healthy with organisms like earthworms that grow productive crops. Finally, he demonstrated how decaying roots, leaves, and debris help to build organic or “good qualities,” as Mr. Hall explained it to the kids. The importance of soil conservation and simple ways to keep soil in place were addressed also. The kids were very attentive and for them to actually see what they have been studying simply emphasized the importance of soil.

On May 8, 2014, Gully Branch tree farm held its annual field day for Bleckley County fifth grade students. The award-winning tree farm is owned by Earl and Wanda Barrs. Mrs. Barrs has been hosting the event for many years. Approximately 200 students in attendance enjoyed many activities such as a wagon ride through the forest, forestry educational activities, water quality demonstrations, and renewable and nonrenewable resources discussions to name a few. State agencies involved with the event included the Georgia Forestry Commission, the Central Georgia Soil and Water Conservation District, and the Georgia Soil and Water Conservation Commission. GSWCC’s David Hall gave a presentation on the importance of water and how our water can become polluted. He and Central Georgia SWCD District Supervisor Wayne Dykes (Bleckley County) distributed water quality educational materials to each class, which were donated by the Central Georgia SWCD. Students are always very attentive and excited to be at the annual event and leave with a new appreciation for the great outdoors.

On Jan. 12, 2015, the Henry County Soil and Water Conservation District held their first District meeting of the New Year. The first act of business was to give the oath of office to the newly elected Supervisor Vicky Consiglio, re-elected Supervisors Amy Wolf Rollins and Ronald Turpin, and reappointed Supervisors Butch Oliver and Bo Simpson. There are five supervisors representing Henry County, three being elected and two being appointed.  The supervisors meet monthly to discuss pressing soil and water resource-related issues facing Henry County, as well as opportunities for conservation education and outreach. Read the News Release.

In honor of Dr. Jack Tuttle, the Lamar SWCD sponsored a student to attend the 2014 Natural Resources Conservation Workshop in Tifton, Ga. The scholarship recipient was Lamar County Comprehensive High School 11th Grade student Brayan Garcia. Dr. Jack Tuttle was a charter member of the Lamar County SWCD and a founding member of the Georgia Cattlemen's Association. He was elected into the Georgia Conservation District Service Hall of Fame in January 2001 and was the first person named to the Mid-Georgia Cattlemen's Hall of Fame.

The focus of the event was to help agricultural landowners increase the quality and performance of their pastures and hay land.  Partnering with the District on the event were UGA Cooperative Extension, USDA-Natural Resource Conservation Service, and the Georgia Soil & Water Conservation Commission. Read the News Release.

On Jan. 6, 2015, the Piedmont Soil and Water Conservation District held their first District meeting of the New Year. The first act of business was to give the oath of office to the newly elected and re-elected Supervisors representing their counties. Re-elected Supervisors for the Piedmont Soil and Water Conservation District were Mr. Heck Davis, Putnam County; Tim Duvall, Greene County; and Mr. Thomas Macfie, Taliaferro County. The new Supervisor elected to represent Baldwin County is Mr. Richard Torrance. Read the News Release.

2014 Conservationist of the Year Awards

Approximately 200 people attended the 53rd annual Conservationist of the Year banquet held at Rock Eagle on October 7, 2014. The banquet is held annually by the Piedmont Soil and Water Conservation District in partnership with local banks, businesses, and organizations that provide financial contributions to fund the event.  Each year the Piedmont District selects citizens from counties that comprise its district who have been actively practicing soil and water conservation activities on their land.  This year’s recipients are:

Congratulations to all of our winners!

Piedmont SWCD sponsored a 4-H Container Garden Competition in Jones County. Students grew bush beans to see who could grow the most beans before the end of the competition on June 9, 2014. Each plant was scored on appearance, yield, and overall health. Bush bean seeds were planted in a container so every student could participate in the competition regardless of whether they lived in an apartment or if the student was unable to maintain a full garden. The winner among 18 contestants was 6th grade home school student Derek Shook.

On March 29, 2014, the Rockdale SWCD sponsored a tour designed to give hands-on training needed to implement farm conservation practices.

The Towaliga SWCD sponsored an Erosion and Sediment Control Plan Review Information Meeting including responsibilities of LIAs and checklist procedures for plan reviews. The meeting was held at the Garden Patch Restaurant, 100 Southland Drive, Barnesville, Ga. 30204.

Mrs. Missy Garner has been named Warren County’s Conservationist of the Year by the Warren County Soil and Water Conservation District.  The award was presented at the district’s annual program recently for her achievements in soil and water conservation on her farm.